60% chance of rain. That was the predicted precipitation forecast for my most recent trip to the track. I’d never run my car in the rain. Well, not in a HPDE (High Performance Driving Event). My car is a 2005 Mustang GT that’s also my daily driver, so it has been in the rain. I put on a brave face and did some positive thinking. I told myself, ‘eventually you’re going to have to run in the rain, so take it as a learning experience’. Okay, I agreed with my conscience. When I showed up at the track it was gray and cold out, but no rain, yet. Part of me was hoping these conditions would remain constant all day, but the reality was I’d be running on a new type of surface soon…a slick one.

My first two sessions were dry, and therefore great. In fact, I was feeling confident about getting the race line figured out. My instructor (Yes, I’m still a novice) was impressed. I was running his line consistently, making good use of the braking zones, and even performing proper heel-toe down shifts, something I’d been practicing since my last track day. In fact, as we left the paddock for the third session, my instructor told me he wanted me to go Solo by the end of the day. He was that impressed with my driving and car control. He may have jumped the gun.

The track was moist as I drove out of the pits on session three. While bringing the car up to temp on the warm up lap it began to sprinkle. Nothing much, but enough to make me blip the wipers. ‘I guess I’m about to see how my car handles in the wet’, I told myself. Take a deep breath. I remembered from class that grip was greatly reduced in the rain, so I started my braking sooner. I squeezed the calipers down on the rotors much earlier to increase the amount of track needed to scrub speed, but kept the same turn-in, and hit the same apex. I tried to ease on the throttle for the track out of the corner, but evidently I put my foot down too quickly…oops. Without any warning and before I could get the wheel straight, the back end tried switching positions with the front. ‘Both feet In!’ I heard my instructor say. My first instinct had been to steer myself out of the spin, a feat in futility, as it can’t be done once the car has gone that far off line. So, I followed his advice. I applied the clutch and brake simultaneously and let my car go off track.

Welcome to the club. I’d never gone off track before. Some track day events award you with a gag trophy for going off track, sort of like saying, ‘Congratulations! Now don’t do it again.’ It wasn’t the type of award I wanted. But, here I was on the side of the track facing the wrong way in a muddy section of grass. I now had to drive my car back to the pits and talk to the track day coordinator. I had been informed early in the day that all off track excursions were followed by a required ‘meeting’ with the pit boss, and you’re allowed four meetings before you’re done for the day. I managed to rack up three meetings and a black flag by the end of track session four (although that was due to a loose hood latch). Still, he was getting tired of seeing me.
“That’s a heavy car you got there. I know why you went off, but do you?”, he asked.
Yes. I did. But I wasn’t 100 % sure how I was going to fix it. It should be made clear that I wasn’t the only car practicing pirouettes as track conditions worsened. In fact, I watched (through my windshield and rearview mirror) as a silver 911 spun in perfect synchronicity with me coming out of turn one during session four. It made me feel better, but only slightly.

I decided to dial it down a notch. Actually, I dialed it down about seven notches. Cars I had been passing all day started passing me. On a wet track, with my Mustang’s notoriously twitchy solid rear axle, there was no way to keep the back end planted coming out of a corner if I was hard on the right pedal. I had to teach myself to practically stay off the throttle until the steering wheel was pointed straight. It took some fun out of it I’ll admit, but it forced me to concentrate on what my car was telling me. It got loose several more times, but I was able to read the signs and keep it on track . I put a positive spin (no pun) on my situation. If I can learn to listen to my car and make adjustments on a wet track, then I’ll be that much better on a dry track when I can put more power down and gain more confidence. I’m becoming one with my car.

So, what did I learn about HPDE in the rain? Well, for a high horsepower front engine, rear wheel drive car always start slow and progressively add power in small increments when coming out of the corner. Don’t give too much throttle before the steering wheel is straight. For my car, there’s a huge difference between a wet track and a dry track. Here’s a hint that should help everybody; stay off the gator strips in the rain! Painted surfaces feel like ice when they’re wet. How do I know? I was still running over them in the rain. I also decided it’s time to concentrate on the rear end of my car, a section that I’ve ignored up until now. My car needs proper shocks, a stiffer rear anti-roll bar, and maybe even a watts link in place of the panhard bar to manage that pesky solid axle. And let’s not forget wider rear tires that can handle rain.

I also learned you get more sessions in the rain, because not as many drivers show up. Ultimately, you will become more in tune with your car on a wet surface and you will learn something new about slip angle and grip. If the goal is to become a better driver then I believe mission accomplished, but you better believe I’ll have some rear suspension upgrades done to the Mustang before my next ‘wet’ track day.

We are always amazed to discover how most people had no idea that track days existed. Sports car owners and driving enthusiasts are missing out on the best part...Driving their cars fast! We decided something should be done to promote High Performance Driving Events. So, we created this website with the goal of turning HPDE into a house hold name. 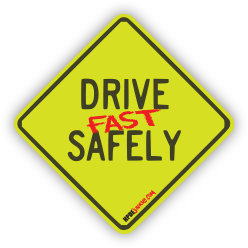